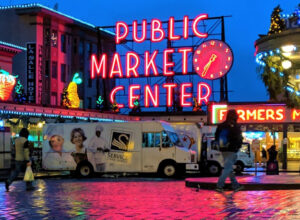 Pacifica is proud to be the Market PDA’s counsel. We represented the Market in all aspects of the development of the MarketFront project from negotiation of the requisite agreements with the City to its financing and tenanting.

With the prospect of the reincarnation of the City of Seattle’s central waterfront as a magnificent linear park in the wake of viaduct’s demolition, the Pike Place Market Preservation and Development Authority, owner and manager of the renowned Market, and the City partnered to develop the site as an integral component of a signature connection between the Market and the new Waterfront. The resulting MarketFront expands the iconic public market, and will integrate seamlessly with the City’s Overlook Walk linking an expanded Seattle Aquarium at its foot to the MarketFront’s terraces accessible from Pike Place.

Constructed at a total cost of $75 million, almost half of which was provided from City waterfront project funding, the MarketFront project features 30,000 square feet of public open space including a plaza and viewing deck with commanding views over the bay and Puget Sound from Mount Rainier to the Olympics. A new all-weather pavilion provides 47 new day stalls for farmers and craftspeople as well as off-hours event space. New retail space features popular restaurants and food-related vendors.

The project also includes 40 units of affordable housing, including a number of live/work units. MarketFront sits atop a new adjunct to the Market’s Western Avenue and Elliott Avenue garage, adding some 300 additional short-term parking stalls for Market and waterfront visitors.

Pacifica is proud to be the Market PDA’s counsel. We represented the Market in all aspects of the development of the MarketFront project from negotiation of the requisite agreements with the City to its financing and tenanting.

LIVING OUR MISSION: Celebrating the Women Partners at Pacifica